Women in the Workplace, the Gender Confidence Gap and #YesAllWomen

Last week, four important studies brought conclusions relating to women in the workplace. These were not about editors Jill Abramson unceremoniously fired from the NYTimes nor Natalie Nougayrède forced out of her position at Le Monde, although they provide a perfect backdrop. Two of the studies demonstrate how, at either end of the corporate ladder, women are subjected to gender-based inequalities and punishments, these then intersect with a prevalent and detrimental gender confidence gap, and, finally, come to rest in the US government's medical research agency's (NIH) decision to erase sex bias from their biomedical studies. 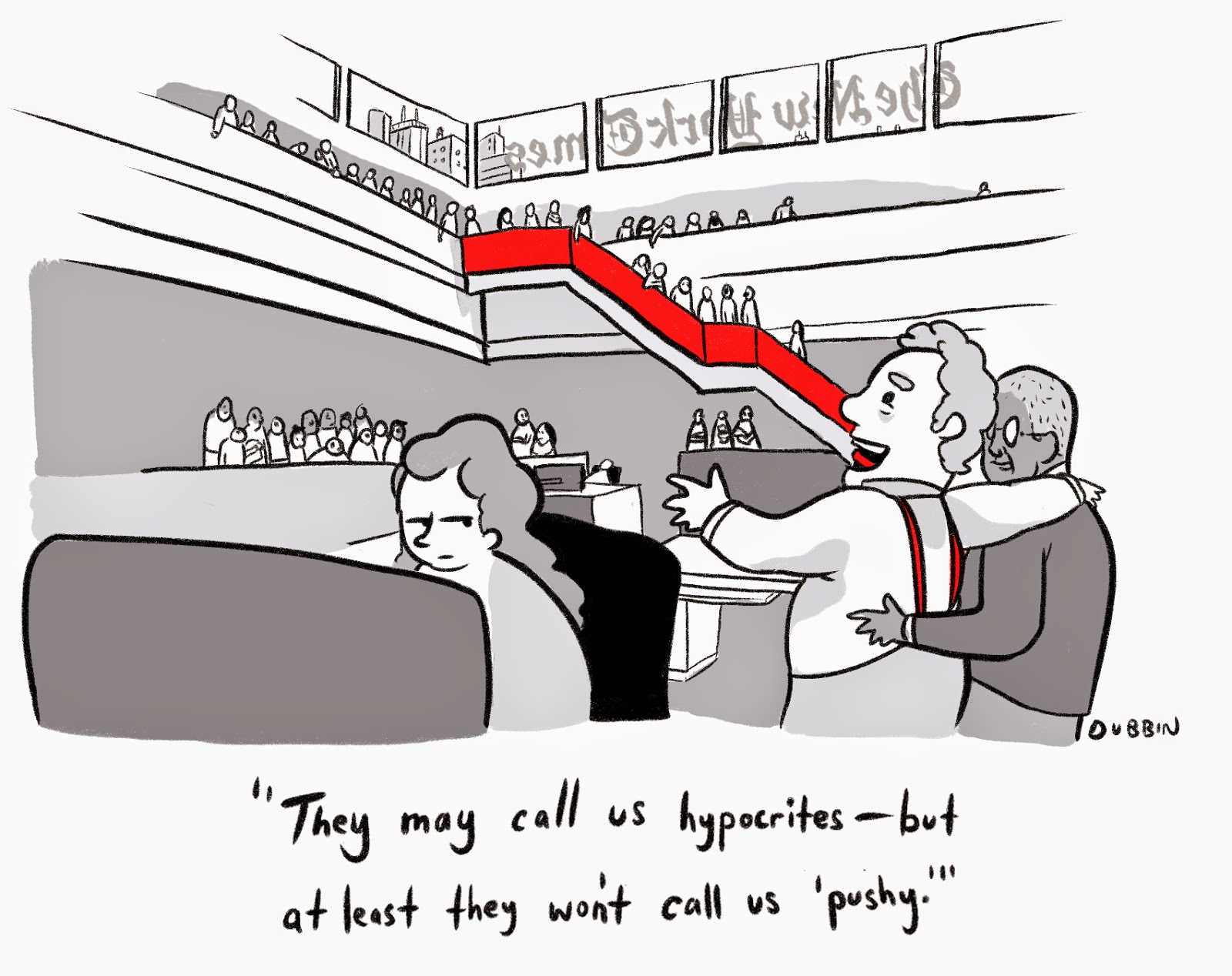 The first study, from the University of Victoria and the Canadian Intern Association shows that the majority of interns in Canada are young women, who are unpaid or are making less than the minimum wage. Around 300 000 young Canadians work unpaid, and the vast majority are women - 49% in the private sector and 25/26% between the public and not for profit sector. While the Conservative government has provided funding towards "high-demand" internships in the fields of sciences, maths and computers, it has given nothing to more 'traditionally female' fields of nutritional sciences, teaching or social work.

The second study, by Strategy&, concretizes what we have all known and felt for quite some time: female CEO's are fired more often than men after a shorter amount of time, are viewed as outsiders by a company's board and managerial structure and are made to walk the fine line between being good at their job (often entailing traditionally male attributes of power, aggressiveness, ambition and risk taking) and conforming to conventional female gender norms (being kind and caring, understanding and willing to let men take the lead).

These studies fit together perfectly: young women begin the journey up the corporate ladder in already disadvantaged fields, having not been encouraged, sponsored or motivated (by parents, teachers or the media) to participate in the maths and sciences at a young age. That the confidence gap has developed so early is only reinforced by the workplace setting; women spend more time in unpaid or minimally earning support roles and when they are moved to managerial positions are often viewed with suspicion as they step outside of the 'carer' and 'supporter' roles they previously occupied and that are conventionally female based.

The gender confidence gap research was presented in the brilliant study by Katty Kay and Claire Shipman, documenting how a lack of confidence, the result of upbringing and biology and everything in between, can hinder women in all areas of her life - especially in relation to success in the workplace. Research from the Institute of Leadership and Management in the UK has shown that female managers doubt themselves far more than their male colleagues; the Manchester Business School showed that women business graduates expect $64 000 a year while their male counterparts expect $80 000 - and they don't negotiate salaries as much or as well as the men. Cornell and Washington State Universities have shown that men overestimate their abilities and performances and women underestimate themselves - and while both perform equally when forced to - women do not force themselves, preferring to not answer or answer 'I don't know' while men will choose randomly on tests, confident in their abilities to choose at all. While the study clearly demonstrates that men do, of course, doubt themselves, they do not, as women do, let that doubt hold them back: they apply to more jobs that they are not qualified for, they speak more in meetings when they aren't sure of the topics, they present more ideas that fail, they assert their confidence in ways that are seen as the norm. Women, on the other hand, will rarely speak unless they are certain of what they are saying, or how it will be received, will rarely apply to jobs for which they are not fully qualified and will rarely present ideas that are not foolproof.

Within this tenuous confidence, women tread the line between success and likeability - while men need only a heavy dose of the first and not much of the second. Indeed, as new research from the Harvard Business School shows, likeability and success for women correlate negatively. The more a woman succeeds, the more she is disliked because she is playing with role congruity: the notion that each sex has specific gender roles they must not discard, lest they disrupt social norms. 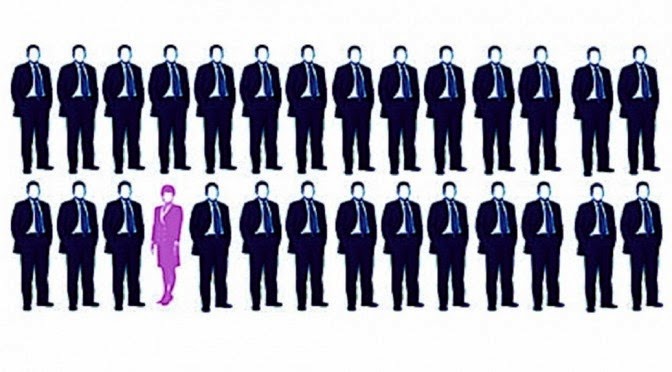 This confidence gap is reinforced by female CEO's losing their jobs in public and unceremonious terms. It is not only men that see women as outsiders in positions of power; women are equally affected by the dearth of female representation in power. The reaction sway two ways: the first is that these leaders are seen as magical unicorns: a once in a lifetime position, obtained only through great personal sacrifice, harder work than their male counterparts, and unattainable to the vast majority of women. Even the thought is unbelievable: who could possibly be a Hilary Clinton? She is one in a million in a sea of men.

The second is equally as detrimental: women are often the foot soldiers of the patriarchal structures that keep women out of positions of power - they too see women as needing to maintain feminine attributes, and will punish their female co-workers for acting out of gender lines - either in being too 'pushy,' or 'abrasive,'  The Harvard Business Review summarizes thus:

"Scientific research also tells us that male and female leaders are liked equally when behaving participatively (i.e. including subordinates in decision making). But when acting authoritatively, women leaders are disliked much more than men. To be clear, it is not that women are always disliked more than men when they are successful, but that they are often penalized when they behave in ways that violate gender stereotypes." 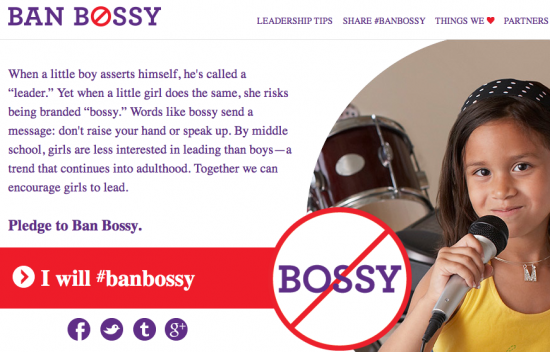 In a structure where, as a woman, it is already more than difficult to get to such powerful positions (men get bigger assignments with bigger budgets leading to bigger rewards than women, high achieving women do not leave the workplace by choice after having children, women are far less likely to sacrifice ethical values for status and money and therefore are less rewarded than men for their part in a corporation's growth, although women declare themselves more willing than men to make personal sacrifices to climb the corporate ladder, they are less likely to receive promotions or attain even middle-management - and this is not to mention all the unseen barriers and second-generation gender biases), it is devastating to know that, once there, more gender-based punishments await.

This brings us to the NIH finally deciding that biomedical studies should be equal in sexes: that women should no longer be seen as the variant to men. It was always assumed that, in science, female menstrual cycles would skew viable results. But viable for whom? Instead, outcomes over the years have shown that illnesses/tests and results differ between the sexes, and should be applied differently, so that both men and women benefit equally from science and medicine.

In short, women are not other to the norm.

Being seen as a constant variant to the male norm makes women inherently less than, with strange attributes that are feared and doubted, especially if they move 'up' into fields traditionally reserved for men: politics, CEO positions, maths, sciences, finance.

As Delphyne Platner said: "If women's stories were viewed as worthy of record, how might this have altered the course of history?"

Consistently being placed as other to the norm is a defining reason for the confidence gap. It is the reason women are expected to work for little to no money. It is the reason we let our doubts hold us back, that we never think we're good enough, that we don't speak up, that we don't lean is as easily as Sheryl Sandberg would like. Being other makes it difficult to have our voices heard and makes it easy for men to dismiss our experiences as less than valid to their own. Being seen as a variant allows women to be treated as objects, their voices silenced and their bodies up for grabs and had as rewards.

Men's rights to women's affection and sexuality take precedence, and seeing women as less than is the basis of misogyny and sexism, leading to, in its extremes, the horrific rants of Eliot Rodger and the aftermath of shooting rampage. It is the reason why women, all over the world, responded with the social media outcry: #YesAllWomen, and why moderate men still have not joined in support and denounced the actions of the misogynists in their midsts.

It is the reason that not three hours after the UCSB rampage, a California man shot at three women who refused to have sex with him. 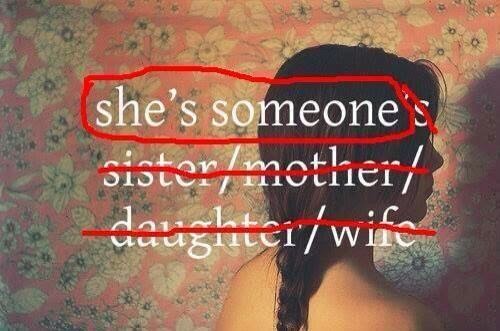 Once we begin to see women as beings in their own right, owing nothing to men, endowed with rights and power and meaning, not only as mothers, sisters and daughters, once we see them as human beings in their own right - perhaps we will see changes in the gender confidence gap. We will see changes in treatment of women in the workplace. In politics and in positions of power. Men will stop feeling they are owed. And women will stop experiencing the diminishment of self at some point in their lives, by a man.

The importance of #YesAllWomen cannot be diminished.
at 1:43:00 PM